How to Cook Chayote 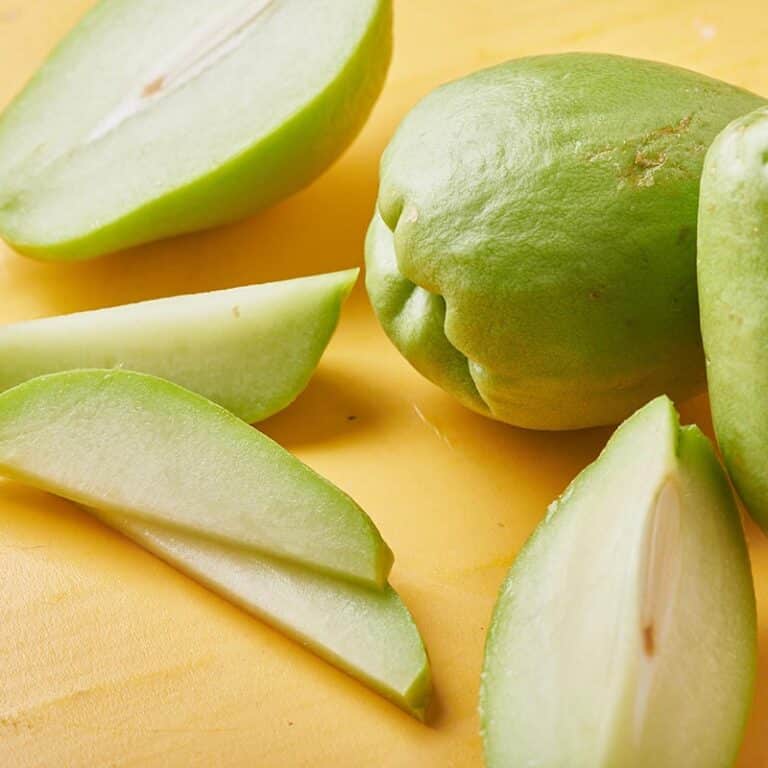 Chayote, pronounced “chai-oh-tay”, is a squash that originated in Mexico. Chayotes are also called mirlitons or chokos in other parts of the world. You may also hear it referred to as a cucumber pear, even though it is not a member of the pear family.

Although it is actually a fruit, chayote is eaten as a vegetable. Chayote is common in the Southwestern U.S. states but is rare in most other places in North America. They were first domesticated in Central America only about a few hundred years ago. Now, they are commonly used in both Mexican and Guatemalan cuisines.

Chayote is a green, thin-skinned squash that average about 5 inches long, and 8 ounces in weight. Its shape slightly resembles a pear but is a more vibrant green in color. Its outer skin is bumpy and can be a bit hairy/prickly. The chayote in the U.S. tend to be smoother and more pear shaped than those grown in other places around the world. Inside the chayote, there is a layer of light green fruit that surrounds the seed — which is actually edible, but not to everyone’s liking!

When buying chayote avoid those with blemishes or an uneven green exterior.  The shape of the chayote is irregular, and can vary quite a bit.

How to Cook Chayote: Chayote is a squash that originated in Mexico. Here’s everything you need to know about how to buy, store, and cook with chayote squash.

Chayote has a notably mild flavor compared to most fruits and vegetables. Its flavor tends to be described as a cross of an apple and a cucumber but not as flavorful as those two fruits. Its texture is crispy, similar to a fresh piece of jicama. Because of its mild neutral flavor, it is easy to add into any dish.

Where to Find Chayote

Chayote will be found more abundantly in the states where they are grown, especially the southwest United States. However, most grocery stores will carry chayote in their produce section.  Some farmers markets may also feature chayote, obviously depending on location and season. October through March is peak chayote season, but most grocery stores carry it year round.

Zucchini or summer squash is the best and most easily available substitute for chayote.  It also has a mild flavor, like chayote, though sometimes slightly more bitter than chayote. Even though zucchinis can be eaten raw, they are usually cooked, as the vegetable can then absorb other seasoning in the cooking process and become sweeter and richer in taste.   Like chayote, zucchinis are also adaptable because they are quite bland in flavor and can absorb a lot of other flavors.

Green papaya, which is less readily available than zucchini, can also be used as an alternative to chayote.  Green papaya are papayas that have not ripened.

Sometimes chayote is used in place of apples, kind of like a mock apple pie.

How to Eat Chayote

Chayote does not need to be cooked to be enjoyed. You can eat it raw just like how you would eat celery or cucumber. Chayote is a great addition to stews, salads, casseroles, or sautés. Although the skin is edible, it’s not very tasty or appealing texturally, so peeling the skin is usually a good idea.  This is done quite easily with a peeler or paring knife.

Chayote can be eaten and cooked like any other squash. Chayote can be roasted like many other vegetables, getting sweeter and more flavorful in the caramelization process.   They can also be fried, steamed and boiled.

How to Store Chayote

Chayote will last for up to a month when it is stored in an air-tight container in the fridge to prevent drying out.  A plastic bag or sealable container will work great.

Chayote freezes nicely, as long as you blanch it first.  Wash, peel and slice the chayote, then blanch it in salted boiling water for 2 minutes.  Then drain the chayote, and plunge it into an ice water bath to stop the cooking.  Freeze in a freezer proof sealable bag with the air pressed out for a few months until you are ready to use.