How to Cook Rhubarb 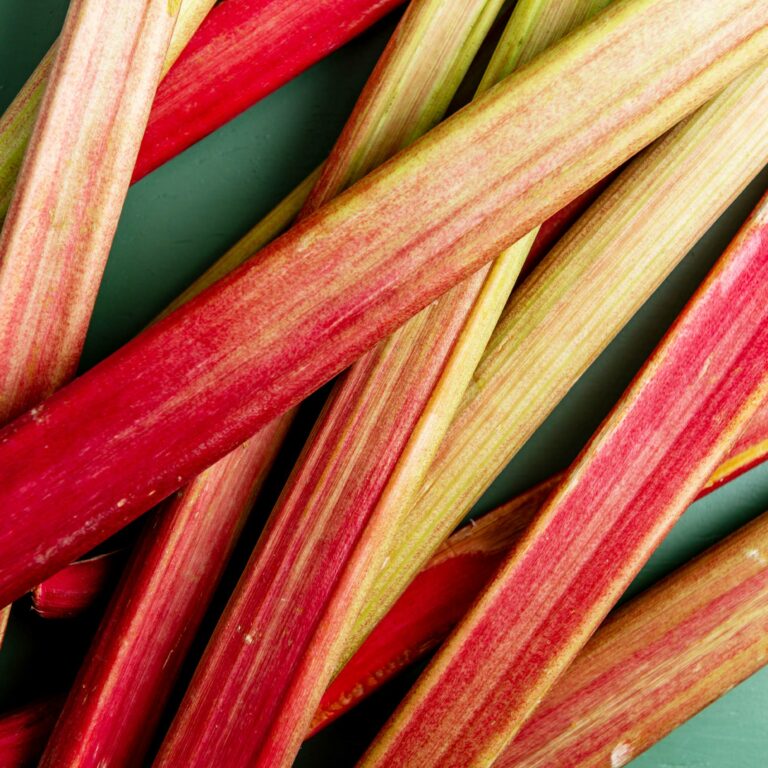 Rhubarb is a vegetable that makes many people very happy, a classic harbinger of spring in temperate climates.

Rhubarb is a perennial vegetable, a member of the sorrel family, which often gets cooked as though it were a fruit.

It looks a lot like very tall reddish-pinkish-purplish celery.  It can be deep crimson, streaked with pink, or just pale and rosy.

Rhubarb is quite tart and is balanced often against other sweeter ingredients. Also, usually some sort of sweetener is adding in the cooking process, especially when used in dessert recipes.

How to Cook Rhubarb

To prepare rhubarb for cooking, trim the tops and bottoms and peel off any noticeably stringy bits.  If any leaves are attached throw them out — the leaves have a high level of natural toxins and should not be eaten.

Its nickname is the “pie plant”, since it so often ends up as a pie filling, or crisp or cobbler.  Usually in this preparation it is combined with a sweeter fruit, like strawberries.  Rhubarb is also often used to make preserves and jams.

But you can also eat rhubarb raw!  Again it’s quite tart, so should be added to salads and other dishes sparingly, or use as a tangy puckery punctuation point to a fruit salad.

And you can use rhubarb in savory dishes, such as stews or braises.

Rhubarb can also be canned.

Where Can I Find Rhubarb?

Rhubarb is harder to find when out of season, but in season it can be found in the produce section of the supermarket, or at farmers’ markets.  It is sold in bunches, or sometimes individual stalks.

How Do You Pick Good Rhubarb?

Choose fresh crisp stalks with good color and no blemishes.

When is Rhubarb in Season?

Rhubarb grows and is harvested in the spring.  Early spring yields stalks that are more tender, late spring/early summer rhubarb is more flavorful.

How to Store Rhubarb

Rhubarb can be stored in the fridge for up to 5 days, wrapped in plastic.

Rhubarb is high in vitamin K and fiber.  It also contains some manganese, magnesium, calcium (not all of the calcium gets absorbed when eaten) and vitamin C.