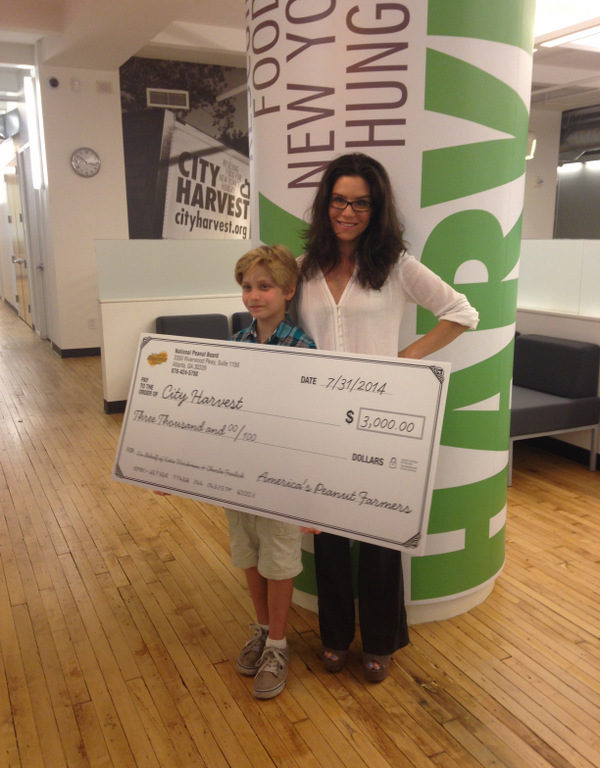 Last year just before my dad died, my younger son Charlie cooked up a plan.  He’s always been highly affected when he sees a homeless or hungry person on the street, on the subway.  Since he was old enough to register other people’s situations, he has asked me to give him some money to offer to a person in need, and I always do.

My husband and I have been actively involved with hunger relief organizations such as Share Our Strength and City Harvest for many years, and this is clearly an issue that means a lot to our whole family.  There is no reason people should want for food, especially in this country.

But one day in February Charlie, then age 10, looked at me after giving a dollar to someone and said, “Mom, this isn’t enough.  We need to go bigger.” We talked about the various ways in which we could raise money, and he fixated on a restaurant fundraiser, a dine around event that would gather NYC restaurants who would cook samplings of their great food, and people would buy tickets to come and eat, and the money would then go to City Harvest and Homes for the Homeless.

And he decided the fundraiser should be in a month or so, while it was still cold.  Hence the name, Scold the Cold.

The timing was weird — my dad was quite ill — but how do you say no to this?

Suffice it to say this was a serious undertaking, and with my help and the help of our great friend Jennifer Baum, of Bullfrog and Baum, an amazing hospitality marketing agency, it came to be.  First, the extraordinary Liz Neumark of Great Performances donated Mae Mae Cafe to be the venue.  She did this after meeting with Charlie for 5 minutes.

Then restaurants like Union Square Cafe, and Virgil’s, and Bar Americain all agreed to take part.  Charlie propelled the whole thing forward, communicating with the restaurants, organizing supplies, creating a website, selling tickets, crating a raffle with items like dinner for 2 from Blue Hill.

The event raised $4,000, which was split between the two charities.  And it was MARVELOUS.  Charlie even made a speech, which he wrote hours before, and then lost, but winged it all the same.  One kid + a mission = one hell of a fundraiser.  And everyone involved, from the guests to the restaurants to the people who helped him were energized and touched and reminded of the power of one person wanting to make a difference.

Did I cry?  What do you think?

All of this is leads up to the fact that recently I call a call from the National Peanut Board asking me if I would accept an award of $3000 to be donated in my name to my favorite local hunger relief charity, in recognition of my work in fighting hunger.  Part of their Fuel for Food Campaign.  No catch.  They also wanted to give me $500 to put towards my next hunger relief project.

And that’s when I told them about Charlie and Scold the Cold, and how he was hoping to plan another event, and just wanted to let them know I would pass the $500 over to him to be the seed money for his next project.  They were gratifyingly impressed with this kid.

And so last week when they send the check to City Harvest, also in the form of that super cool big check, the check was written on behalf of both Charlie and me.  I’m proud of the work I’ve done to fight hunger over the years.  But it pales against the pride I feel about what my kids have done to help others, and this project was a shiny example of what a big thought and a lot of hard work can add up to.

Bragging, or “bragging on” as they say down in peanut country, is not usually attractive, but in some cases, it’s necessary.  Go, Charlie, go. 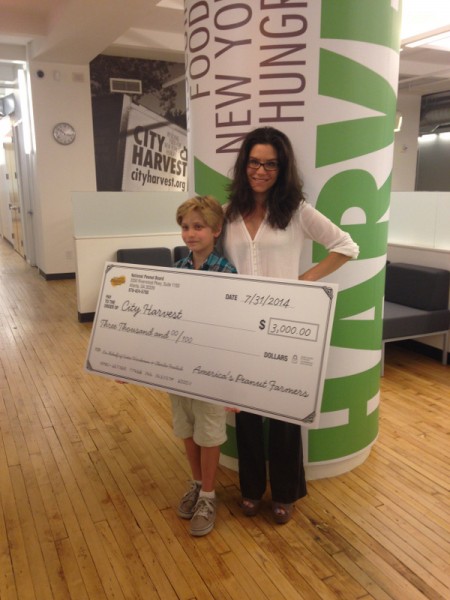