Sometimes one of the most appealing things about a recipe is the small amount of time it takes in front of the stove. 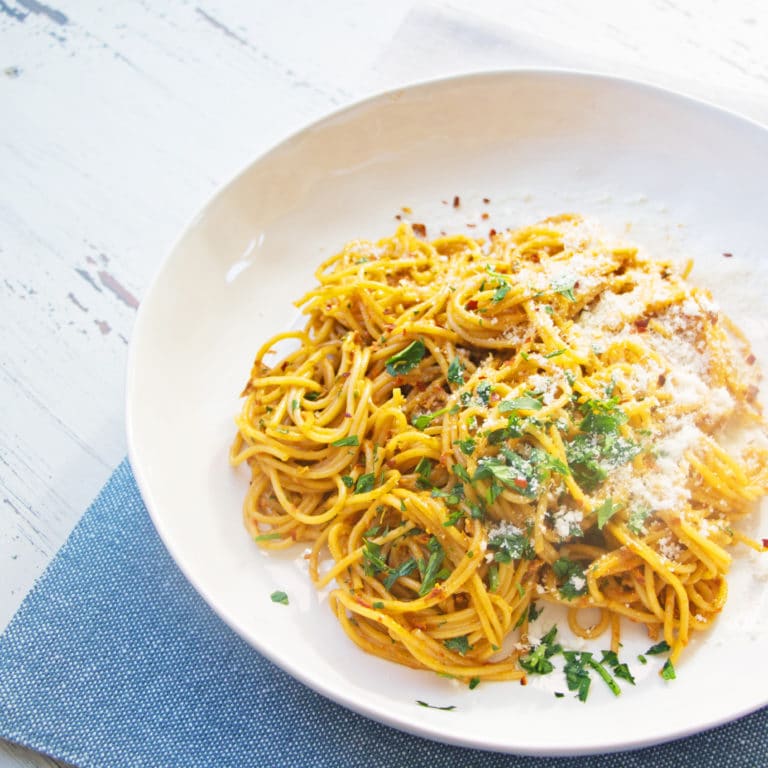 Another 5-ingredient weeknight pasta dinner hero dish.  It’s a recipe to reach for when the most appealing thought about dinner is how little time it will take in front of the stove.

How to Choose Sundried Tomatoes

All sundried tomatoes are not created equal.  First, some are packed in oil, and some are sold just dried.  If you are using the ones in oil, you want to drain them as well as you can, and then you may want to reduce any other oil called for in the recipe.

Then the ones that are just dried can be unforgiving hard little disks, or they can be plump and yielding, and those are the ones you want for this dish, and for any other.  Harder sundried tomatoes can be slightly reconstituted—just place them in a bowl with hot water to cover and that them soak for about 20 minutes, then drain and proceed.

A while back I was in Venice (I know, I know….just as terrible as it sounds) and spent a lovely morning at a big open air market.  At several of the produce stand there were a number of bins of sundried tomatoes, each with different prices per kilo. To my untrained eye, the biggest difference seemed to be size.  But I’m sure there was more to it than that—my Italian begins and ends with food terms (Tagliatelle, Prosciutto, Parmesan) but thus far I still don’t know what the difference was between them. Back to Italy, I guess (someday).

I bought a bag of mid-priced ones, and smuggled them home in my laundry (oh, don’t pretend you wouldn’t do the same). They were so supple and flavorful, and stayed that way for months, and I can only wonder how much better the most expensive ones might have been.  But no regrets—#nosundriedtomatoregrets.

Still, I do need to make a point of asking someone more in the know how to decide which to buy next time I am in such a delightful predicament.

Try roasted tomatoes (which you can roast yourself easily, or purchase at an upscale food market) instead of the sundried for a slightly different, smokier flavor.  This is a creamy, vegetarian pasta with simple flavors.

An extra sprinkle of Parmesan and parsley finished off the dish nicely, as does a sprinkle of red hot pepper flakes.  The only reason red pepper flakes aren’t listed in the recipe itself is because I promised you 5 ingredients (not counting pasta, olive oil, salt and pepper) and I need to deliver on that promise. 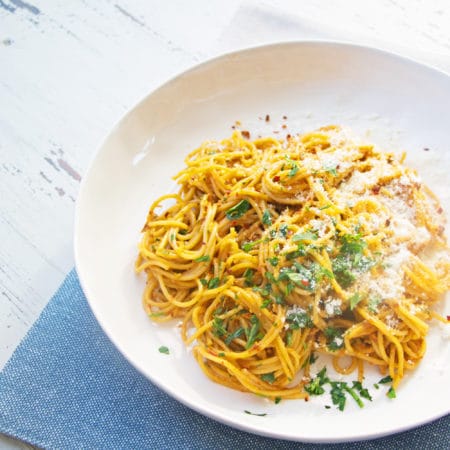 Sometimes one of the most appealing things about a recipe is the small amount of time it takes in front of the stove.
Yield: 6 People
Prep Time: 5 minutes
Cook Time: 10 minutes
Total Time: 15 minutes

What the Kids Can Do:

Measure the ingredients, and cut the scallions and sundried tomatoes with an age-appropriate knife, if they are old enough. Finding a sturdy plastic knife for older kids is a great way to give them some investment in the kitchen. My son used his plastic knives for years.