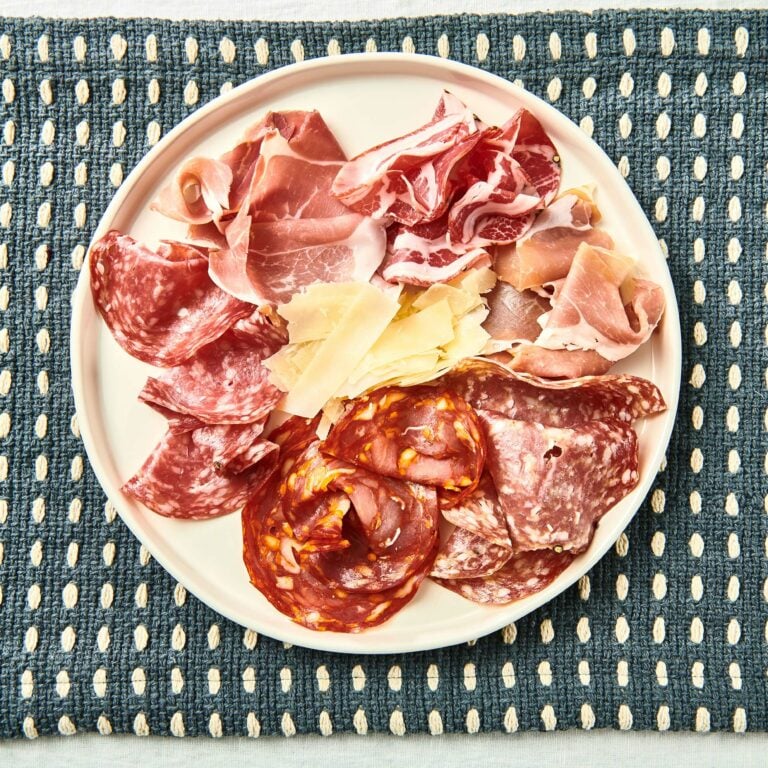 The words “salumi” ( or the singular “salume”) seem to be popping up more and more – on restaurant menus, Instagram feeds, even at some deli counters.  Maybe you‘ve been wondering what exactly salumi means, vs. salami, vs. charcuterie, vs…..?  Let’s do a little 101 on the topic!

Salumi is the category of high-quality cured meats that includes salami, prosciutto and many other types, most pork-based or containing at least some amount of pork.  However, the definition of salumi is subjective and developing, and as the category evolves, producers are stretching the traditional boundaries.  Traditionalists limit the definition to cured meats, made throughout Italy, while others are using the term to describe meats that have been preserved in various ways — including cooked meats — produced in places all over the world.

Emilia-Romagna is the region of Italy most renowned for its salumi, prosciutto in particular, though cured meats are produced all throughout the country.  Charcuterie is the equally famous French cousin of salami, also a wide range of cured meats, also mostly made from pork.

Salumi was born out of the necessity to preserve meat pre-refrigeration, and also use up all parts of the pig with no waste.  Now there are many manufacturers commercially producing packaged salumi, available at many supermarkets.  Some good readily available brands are Olli, Gusto, Coro, Creminelli, and Daniele.

And all over the U.S. producers and food businesses are ramping up their salumi games. Northern Waters Smokhaus in Duluth, MN is a destination for excellent cured meat, featured in their popular sandwiches, and in Pittsburgh, PA Salty Pork Bits makes cured meats that can be shipped nationwide.

Cesare Casella is an Italian chef who is an expert in salumi. Casella says, “For a long time options for salumi in the US were very limited.” Then they slowly started to import some products from Italy. Now in maybe the past 5 or so years many more producers are showing up – a lot more small producers showing up and experimenting.”

What is Salumi? A 101 on the basics of a variety of cured meats, from prosciutto to speck to guanciale to salami.

Chef Casella adds, “Many people don’t understand that it is a cured product. It is not ‘raw’ and you do not need to cook it. It’s cured, so just like pickles, the fermentation process makes it safe (and delicious) to eat.”

The world of salumi is vast.  Here are but a few of the greatest hits of the category.

First, salami, the type of salumi that many of us are most familiar with.  In summary, salami is a type of salumi, but not all salumi are salamis.  In America we are most familiar with firm-textured, dry-cured, sausage style salami, sold either in a whole piece, or sliced in packages or at the deli counter.  But already we are in a huge category. There are so many types of salami available, and within each type so many variations, influenced by region.

Salamis are mostly made with chopped or ground meat that has been salted and seasoned, stuffed into a casing, and hung to cure and dry.  There are also cooked salamis, and soft cured salmis.  In most cases you’ll want to remove the casing before eating, but you can check out a slice with casing to decide.

Sopressata is a dry-cured pork salami that is a perfect example of how all parts of the pig are put to good use in the making of salami.  Its shape is long and slightly flattened. Sopressata usually gets some kick from chili peppers, black pepper, and other sliced.  It can be sliced thick or thin.

Mortadella is a pink, smooth lightly cured and cooked salami made throughout Italy.  It is made with different seasonings from place to place, and sometimes pistachio nuts, and is usually served in thin slices.

‘Nduja (en-DFOO-ya) hails from the Calabrian region of Italy, and it’s distinctive in that it is a spreadable meat, hot with the peppers of the area.  It’s often served with a knife to be spread on bread as an appetizer or a snack.

The second uber-category of salumi are the whole muscle options, such as prosciutto, speck, and guanciale.  Most of these kinds of salumi are dry cured with salt and various seasonings and wine. They are usually eaten thinly sliced and uncooked, but sometimes cooked, often as an ingredient in other dishes.  In the most perfect world you would purchase these kinds of salumi sliced to order at a store with high turnover. But, you can also find packages of salumi in the grocery store. Look in the fine cheese section or near the deli counter.

The most familiar type of salumi to most people is probably prosciutto, which is a whole category unto itself.  The most common type of prosciutto is salt rubbed whole pork leg that has been cured for at least 400 days in cool dark rooms.  Prosciutto is usually sold in paper-thin slices, and has a salty funky flavor, a silky texture, and a delicate toothsomeness.

Italian or Italian-style speck is somewhat similar to prosciutto but with a bit more umph. It usually with a bit more seasoning and smokiness, and a bit denser.  It can be eaten as is, or used in recipes.

Pancetta is essentially the bacon of Italy, a cured version of pork belly. It is often sold rolled into a cylinder, sometimes sliced, and sometimes diced.  It can be eaten as is, but it is often sauteed and used in all kinds of dishes from braises to pasta sauces to salads.

Guanciale is made from the jowls of the pig, seasoned with bay leaves, pepper and juniper.  It’s also usually sold in rolled format, again often sliced. Guanciale is most famously used in pasta sauces like carbonara and amatriciana.

Coppa or capicola is from the top of the pig’s shoulder. It is seasoned differently throughout Italy, usually in specific regional ways.   It’s usually quite flavorful – often made with wine and bright red, smooth in texture, fatty in the best way.

The best way to start getting to know the wide world of salumi?  Taste them!  If you have a good gourmet or Italian market near you, hit up the deli counter and ask to try some samples.  And remember that you can buy a quarter of a pound of lots of different things.  Keep salumi in the refrigerator but bring it to cool room temperature (in the 60°F range) for the best eating experience.

Chef Casella thinks we should all be eating more salumi. “Every Italian household probably has a few types of salumi in the refrigerator that can be pulled out to make a quick meal.”  Sounds like a plan.