How to Cook Jackfruit 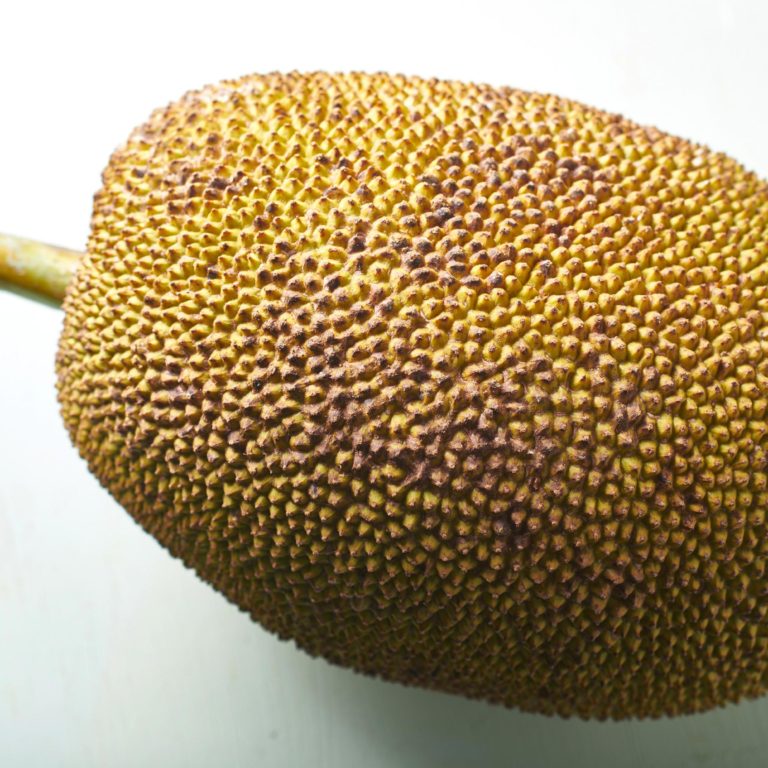 Have you ever heard of Jackfruit?  If you are a vegan or a vegetarian, the answer is probably yes.  If the answer is “nope, not up until now”, keep your eyes open: you’ll start noticing it everywhere.

Jackfruit is a huge tropical fruit that is often used as a meat substitute. It is native to southwest India, but also grows in Southeast Asia, Mexico, the Caribbean, and South America. Its ability to be cooked and then chunked out or shredded like chicken or pork make it a go-to main ingredient in many vegetarian and vegan dishes. The texture is quite similar to meat when cooked.

How to Cook Jackfruit: Everything you need to know about buying, cutting, and preparing Jackfruit.

With the precipitous rise of vegetarianism and veganism, the popularity of jackfruit is climbing up, up, up.  Robert Schueller is the head of marketing at Melissa’s Produce, a specialty produce company, and he has noted the upwards trend of jackfruit for several years now. He says it was about 5 years ago that the fruit started to really take off when vegetarians and vegans found out how this fruit could be used as a ‘meat substitute’.

Jackfruit is popping up on menus all over.  Yes, certainly at the increasing number of vegan and vegetarian restaurants across the country, but it’s also being incorporated into dishes at some more mainstream establishments.

Jackfruit ranges from 15 to 70 pounds – sometimes even larger.  Bigger ones are usually used in the foodservice industry or processed to make canned or packaged jackfruit “meat”.

The exterior of unripe jackfruit is green in color and covered with spiny, knobby bumps. As the fruit ripens the skin turns to a yellow color the fruit becomes very fragrant.  Inside, the fruit is a bright orangey yellow, in chunks called “pods” that are held together with a stringy white membrane.  Each pod contains a large seed, which is also edible, but only when cooked.

It’s available as a whole fruit, and sometimes sliced into more manageable, usable pieces for a typical household.  Unripe it’s green and unyielding, as it ripens it softens, turns yellow, and gets some brown spots and starts to smell sweetly fruity.

Smaller ones are available whole in specialty stores, and some well stocked supermarkets, or markets that feature foods from one of the jackfruit-growing countries

It’s also sold canned, sometimes in brine or in syrup, and the various types are sold in specialty and Asian stores, and increasingly in traditional supermarkets.  Avoid the jackfruit in syrup, unless you are looking to make a very sweet dessert preparation.

You can also buy the seeded pods (chunks) in packages, like this one or this one.  And there are tons of prepared jackfruit foods also being sold, which are seasoned, cooked and ready to eat.

Unripe jackfruit’s flavor is very neutral,  kind of like a potato.  It takes well to all kinds of seasonings, so it can be used as a blank slate, much in the way a mild white meat is prepared.   When it ripens, the taste sweetens and becomes more pronounced, tasting somewhat like a cross between a banana, a mango, and a pineapple.

Jackfruit has some nice nutritional bang for the buck.  1 cup has 155 calories, and almost 3 grams of protein, 2.5 grams of fiber, a good dose of vitamin C, and very little fat.

How Do You Cut Jackfruit?

When it is used in a cooked preparation, the freshly picked non-ripe version is used, or packaged, seeded  jackfruit.  If you are using whole jackfruit you need to cut and seed it yourself. It’s used most often for pulled pork sandwiches, barbecue type recipes, and as a taco meat.  Once ripe it can be used in sweeter dessert preparations.

Jackfruit are quite sticky, so it’s best to wear gloves (non-latex – in fact the fruit itself contains a compound that is like latex, so if you have a latex allergy be aware of this).  And also wear old clothes, and you might want to cover your cutting board with plastic wrap.

Cut the jackfruit crosswise into thick 2-inch slices with a heavy sharp knife.  Be careful – the fruit is sticky and the rind is thick and spiky.

Cut the slices in half along the membrane, and then use your hands to start to pop out the pods.

The jackfruit pods can be eaten as is.  The flavor will be mild if unripe, and fruity if ripened.  Or cook the jackfruit according to a recipe.

How to Cook Jackfruit

Once you have prepared the seeded pods, the most common ways to prepare the jackfruit “meat” is to boil the pods for about 45 minutes, then shred or chunk the cooked flesh. Or you can cook it in a pressure cooker, which usually takes about 10 minutes.

Lots of recipes call for cooked jackfruit, with the assumption being that people will use canned, which is the most available and most convenient way jackfruit is packaged and sold.

The seeds can be boiled or roasted, and have a taste and texture similar to chestnuts when cooked.