A flavorful and versatile blend of garlic, onions, peppers, cilantro and tomato, the indispensable base of so many Puerto Rican and other Latin American dishes. 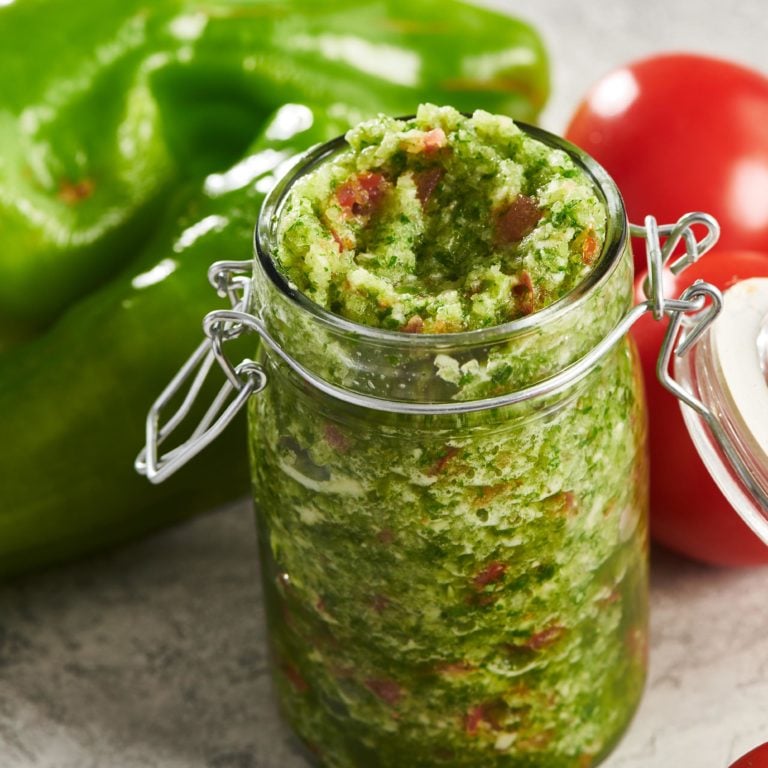 Sofrito is the indispensable base of so many Latin American, Caribbean and most notably Puerto Rican dishes.   It’s a blend of garlic, onions, peppers and cilantro (or culantro, which is a more potent cousin of cilantro), plus sometimes tomatoes or tomato sauce and other seasonings.  It can be kind of loose or thick, depending, and it may be quite pureed or still a little chunky.

The most common peppers used in sofrito are a combo of cubanelle peppers and ajices dulces.  Cubanelle peppers are often available at supermarkets, and certainly markets with a good selection of Latin produce.  If you can’t find them you can use Italian frying peppers.

Ajices dulces might be a little harder to find, but if you are serious about your sofrito it’s worth hunting around for a source.  These brightly colored peppers are popular in in the Caribbean, particularly Puerto Rico, Cuba and the Dominican Republic.  The Chili Pepper Madness website also tell us that they might be called/spelled Ají dulces,  ají dulce, ajicito or ajíes in Puerto Rico; ají gustoso or ají cachucha in the Dominican Republic; or ají cachucha in Cuba. The name translates to “Sweet” (dulce) “Pepper” (aji).

They look like haberneros but are hardly spicy at all, compared to super hot haberneros.  They start off as green and then ripen to varying shades of oranges and reds.  As the name suggests there is a sweetness to them, and they are really quite mild as hot peppers go, much milder than jalapenos.

Since I couldn’t find them, I did substitute in jalapenos, but I made sure to use fewer and also to seed and core them, as the seeds and membranes are where most of a pepper’s heat resides.  You could also just use one chopped red or orange or yellow bell pepper (again, seeded and cored), but I like a bit of heat in my sofrito.

Sofrito: A flavorful and versatile blend of garlic, onions, peppers, cilantro and tomato, the indispensable base of so many Puerto Rican and other Latin American dishes.

How to Make Sofrito From Scratch

Place the onions, cubanelle or frying peppers, garlic, ajices or jalapeno, and cilantro in a food processor.

Add the tomato chunks and pulse until it is the desired consistency.

This sofrito recipe is inspired by Daisy Martinez, a well-known Puerto Rican chef and cookbook author.

How to Use Sofrito

Sofrito is the foundation of so many Latin (particularly Puerto Rican, Dominican, and Cuban) dishes.  Having some on hand means you can add an instant pop of flavor to all kinds of dishes.  It’s very popular in rice dishes, such as Arroz con Gandules.  It’s also used in stews, bean dishes, soups, egg dishes, meat and poultry dishes, even as a salsa-like dip or condiment.

I recently stirred some sofrito into mayonnaise and added some mustard and used it as a sandwich spread with a variety of sliced cold cuts, and it was delicious. Unorthodox but delicious. I’ve also stirred some into tomato sauces, and I’m thinking a sofrito garlic bread is on the horizon.

How to Store Sofrito

Sofrito is easy to make in big batches and keep on hand for all kinds of recipes.  You can keep it in an airtight container in the fridge for up to two weeks. Or it’s easily frozen — a good way to freeze sofrito for easy use is to freeze in an ice cube tray. After the cubes are frozen, transfer them into a freezer proof zipper top plastic bag and use as desired.

Frozen sofrito will last for 6 months, possibly even longer; the worst that happens is that it starts to lose a bit of texture and flavor, but it is still fine to use. If you are adding it to a soup or stew you don’t even need to defrost it first.

What to Serve with Sofrito:

A flavorful and versatile blend of garlic, onions, peppers, cilantro and tomato, the indispensable base of so many Puerto Rican and other Latin American dishes.
Yield: 24 People
Diet: Gluten Free, Vegan, Vegetarian

Makes about 4 cups. Ajiles dulces look a lot like haberneros or scotch bonnet peppers, but they are much, much milder in heat.