I always wanted to make Salt Cod Cakes, having tasted them a couple of times in tapas joints. My kids liked these, to my slight surprise. 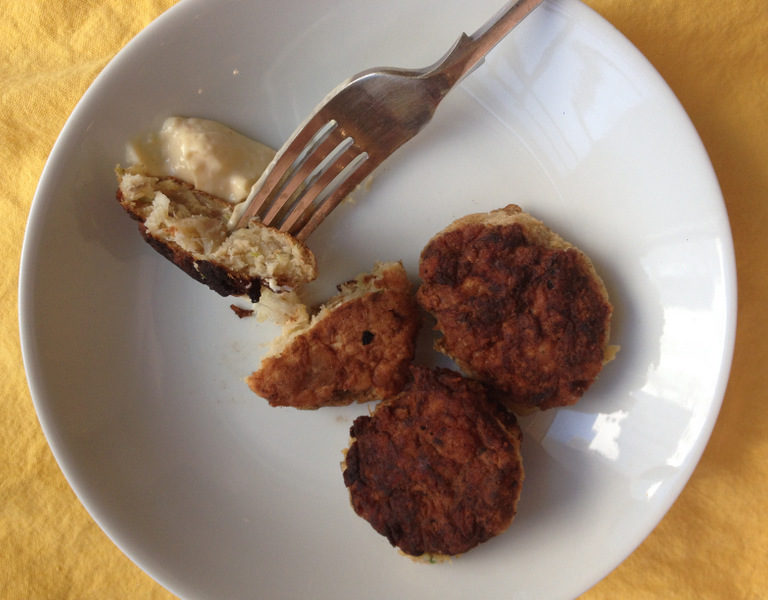 {NOTE: During several seasons of Downton Abbey I decided to cook dinners to eat while watching the show that somehow felt kind of Downton Abbey-ish to me.  No claims to authenticity, truly, but a fun little project.}

I was in Queens last weekend, and found myself in a truly fabulous supermarket with a heavy duty stock of Hispanic ingredients like nopalitos (pickled cactus) and salt cod (bacalao or baccalou – with various spellings), and I brought home as much as I could carry on the subway.  If you ever want to jump start yourself out of a cooking rut, go to a supermarket in a different area of your world.

Salt cod, or salted cod, is cod which has been preserved first by salting, then by drying. It must be soaked before it is used – otherwise it is tough and inedibley salty.  Make sure to change the cold water at least three times during the soaking process.

I always wanted to make Salt Cod Cakes, having tasted them a couple of times in tapas joints.  They are really Portuguese in origin, though salted cod makes appearances in cuisines from Italian to the islands.

I read that cod was one of the fish Mrs. Patmore would have had the most access to, and because preservation was so important in that time, salt cod probably figured prominently though I lost a little steam on the research there.  So, cod cakes seemed like a fitting thing to make for our Downton Abbey viewing tonight.  I think these might have been more of a downstairs meal than an upstairs meal.

So, did my kids like these?  Yes, to my slight surprise, although they weren’t all that excited by the smell of the cod and the potatoes boiling away during the first part of the cooking process.  Oh well.  No pain no gain, boys. 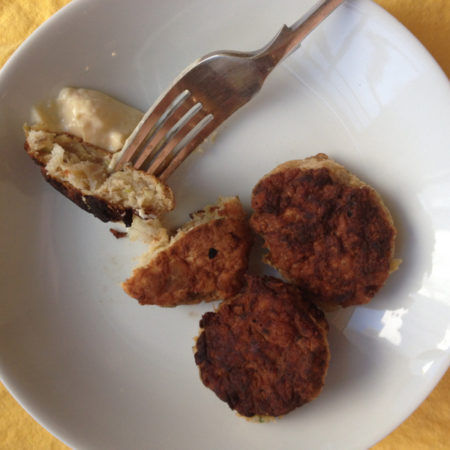 I always wanted to make Salt Cod Cakes, having tasted them a couple of times in tapas joints. My kids liked these, to my slight surprise.
Yield: 4 Servings