In this homemade version of a Chinese restaurant favorite crispy nuggets of moist chicken are glazed in a slightly sweet, slightly spicy, and immensely flavorful sauce. 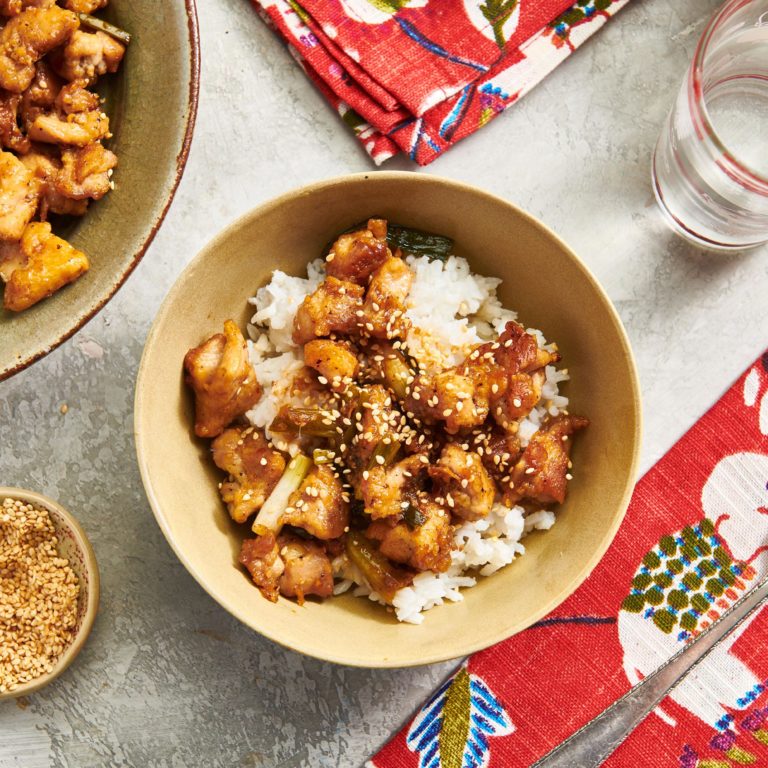 General Tso’s Chicken is one of those dishes that graces many an American Chinese food restaurant, and one of those dishes it’s hard not to order.  Often it’s deep fried, and — while irresistible — not the kind of thing you can justify eating too often.  This version incorporates all of the flavors that make this dish so seductive, but it shouldn’t leave you wondering why you treated your family to this dinner.

I use chicken thighs, which is what is usually used in restaurants; it’s moister and more flavorful than chicken breasts, but you can use chicken breasts if that’s what you prefer.  The cooking time will be slightly shorter for white meat (breasts) vs dark meat (thighs), so keep that in mind.

The chicken is tossed with cornstarch before being cooked which allows it to form a nice crispy crust on the outside.  It also helps to thicken the sauce when it is added at the end, so two advantages for the price of one ingredient.

You’ll want to cook the chicken in two batches so as not to crowd the chicken in the pan.  Make sure the pieces are separated from one another, and while you don’t have to brown all of the sides, do brown the chicken as much as possible without overcooking it.

General Tso’s Chicken: In this homemade version of a Chinese restaurant favorite crispy nuggets of moist chicken are glazed in a slightly sweet, slightly spicy, and immensely flavorful sauce.

The sauce that coats the chunks of lightly pan-fried chicken is a bit sweet, a bit spicy, and immensely flavorful.  Garlic, ginger, sesame oil mingle with the soy sauce, brown sugar, and vinegar to create a glazey sauces that clings nicely to the chicken. The short cooking time needed to thicken up and heat the sauce allows the nuggets of chicken to remain crispy, which is part of the appeal of this dish.

What is the Difference Between Sesame Chicken and General Tso’s Chicken?

General Tso’s chicken tends to be a bit sweeter and a bit hotter than sesame chicken, which as the name suggests, has a pronounced sesame flavor.  I use a bit of sesame oil and suggest garnishing with toasted sesame seeds in this General Tso’s chicken recipe, so there is still sesame going on, but it’s not the predominant flavor.  If you want your sauce a bit spicier you can bump up the amount of red pepper flakes, or even add a squirt of hot sauce, like Sriracha, to the sauce.

How to Pronounce General Tso

SO, how do you spell and pronounce General Tso?

I can only imagine that the waitstaff in a Chinese restaurant that serves this dish has heard it all.  First, the spelling.  General Tso’s Chicken is the most common way you’ll see it spelled, but Tsao, Tsau, and even Gau are not uncommon.

The short answer from a spin around the internet and a confab with my friend Katie Chin who is Chinese AND a chef is that you pronounce it like “so” (silent t), but as I write this I am sure others will disagree.

What to Serve with General Tso’s Chicken: 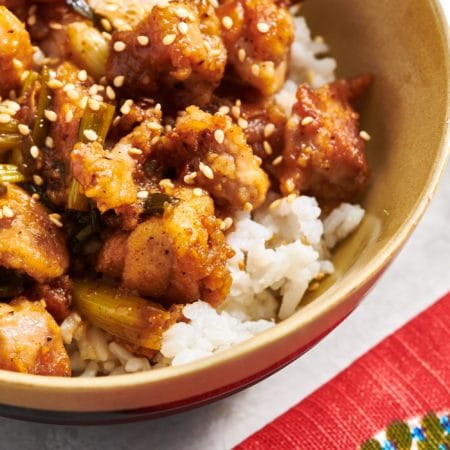 This recipe calls for chicken thighs, which is what is usually used in restaurants; it’s moister and more flavorful than chicken breasts, but you can use chicken breasts if that’s what you prefer. The cooking time with be slightly shorter for white meat (breasts) vs dark meat (thighs), so keep that in mind.