If you want to make people instantly happy to be walking into your house, plan to have one of these babies finishing up in the oven. 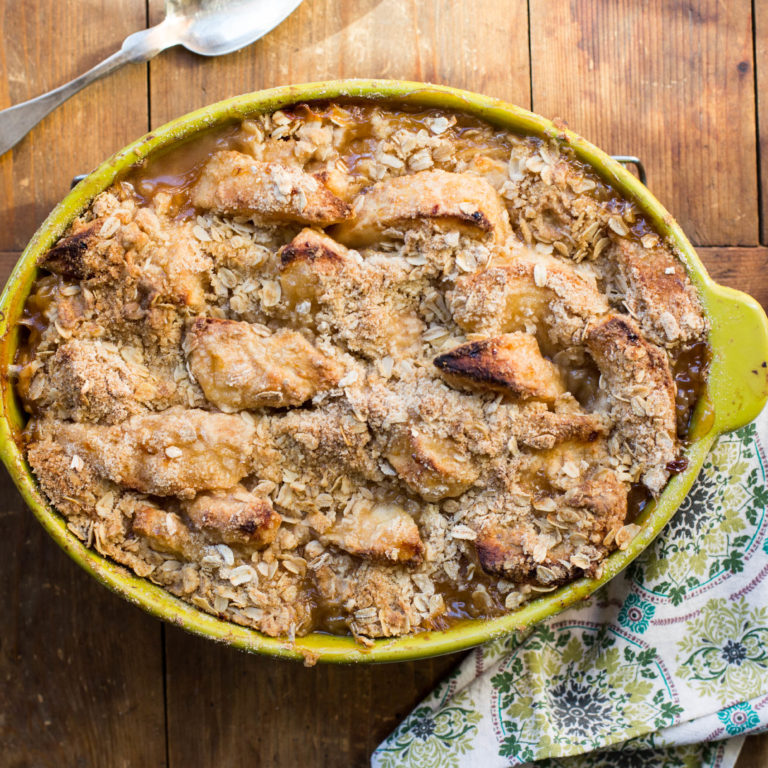 Let’s hold hands and admit something; the best part of a crisp is the topping. Sure, the spiced, sweet, tender filling is delicious, but aren’t you quietly ecstatic when your serving has a thick slab of crumbly crust on top?

Long ago we had a dinner guest who—while we were hustling around getting little kids to bed and stacking dishes—managed to eat his way through most of the topping of an apple crisp meant for 8, leaving behind the naked, beige soft fruit underneath. We still love him, but we haven’t forgotten.

But since we don’t want to just bake layers of crisp topping without fruit beneath it, apples must be peeled and sliced. Though I have now planted a major seed in my own brain. Next up: Apple Crisp Slab Pie, with perhaps a 1:1 ratio or topping and apple layer thickness.

What Kind of Apples to Use in Apple Crisp

There are a ton of different kinds of apples in the world. Hannah, one of Jack’s oldest best friends (they met when they were 3 – oh, don’t let me start waxing nostalgic), once decided to explore the wide world of apples by taking a single simple pie recipe and making it every Sunday with a different variety of apple, from Macoun to McIntosh. So, same pie, same ingredients, only the type of apple changed. A pretty cool way of getting to know the different varietals if you ask me.

I like to use a combo of apples in my apple crisps and pies so that there are layers of apple flavor. Some of the best choices are:

This easy apple crisp recipe with oatmeal streusel topping can be in the oven in 15 minutes if you get a little help peeling the apples.

Getting the apples ready for the crisp is half the battle, so if you have anyone you can enlist to tackle that, you can ready the other ingredients and the topping in the meantime. If these two tasks can be accomplished simultaneously then the whole crisp will take less than 15 minutes to get into the oven minutes into the oven. And while you eat dinner, curling, fragrant wisps of crisp perfume will reminding you that dessert is coming. 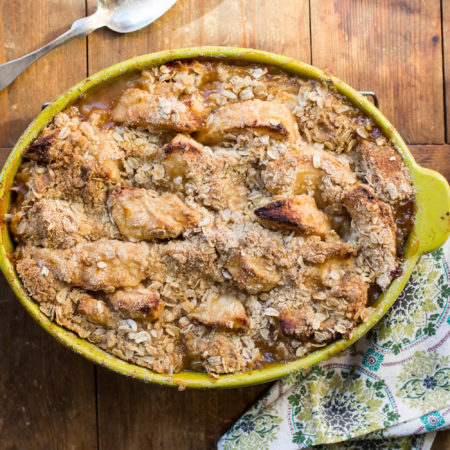 If you want to make people instantly happy to be walking into your house, plan to have one of these babies finishing up in the oven.
Yield: 10 People
Prep Time: 25 minutes
Cook Time: 45 minutes
Total Time: 1 hour 10 minutes