Just because Sex in the City has ended doesn't mean we can't still love this classic pink cocktail! 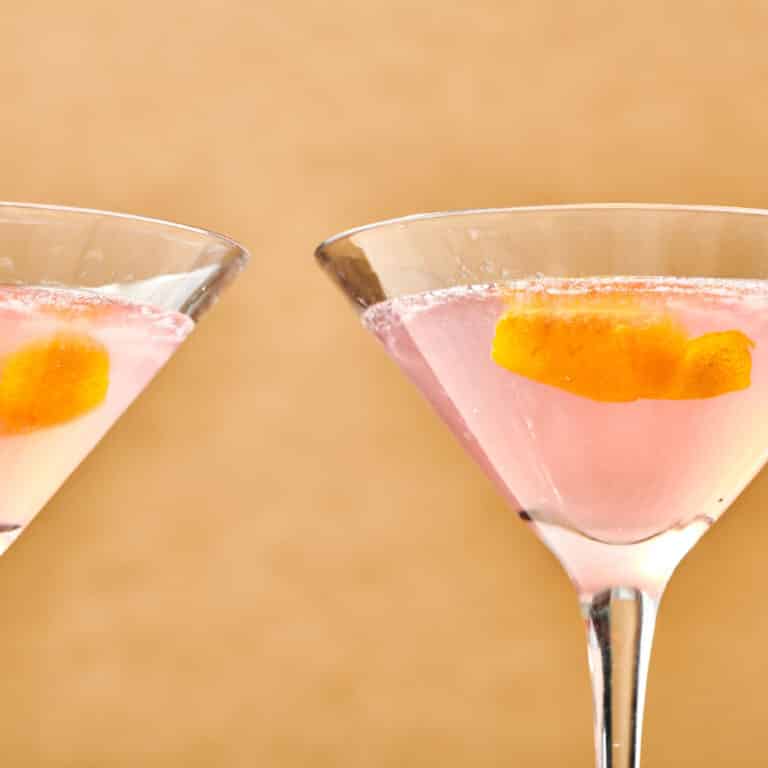 There are many, many, many (most?) of us who can’t think of a Cosmopolitan without thinking of the Sex in the City ladies.  The drink was around way before the show, but Carrie Bradshaw and her ride-or-die friends made it iconic for a certain time and place.  Hello, New York City in the 90’s.

It’s a shame when a perfectly good drink or dish goes out of fashion just because it was dizzyingly popular for a while.  Just because it became famous doesn’t mean it should become infamous.  It was beloved and extremely popular for a reason!  Manolo Blahnik shoes survived Sex in the City, and I think the Cosmo should, too.

What is in a Comso?

A Cosmo is made of vodka (sometimes plain, occasionally flavored), cranberry juice, orange liqueur (most commonly Cointreau), and lime juice.  It’s usually garnished with some kind of citrus wheel or strip of zest.  There are infinite ways to play with the basic recipe, but that’s what you’ll get at most restaurants and bars if you order one.  But obviously you’ve tried one and liked it, and now you’re here to make one!

Who Invented the Cosmo?

The Cosmo as we know it now has not been around for a very long time.  A famous NY bartender named Dale DeGroff helped launch the drink’s popularity, but he doesn’t lay claim to inventing it.  Sheila Lukins says that “while the Fog City Diner in San Fransisco had it on their menu for years, his best sources said it came from a bar called The Strand in Miami Beach and was created by a woman named Cheryl Cook.”

I looked up Cheryl Cook and the Cosmopolitan and found the story corroborated.  One source was Gary Regan on Liquor.com, and according to Mr. Regan when he connected with Ms. Cook, she said she was the creator of the drink, explaining: “’[It’s] merely a Kamikaze with Absolut Citron and a splash of cranberry juice.’ Spoken like a true bartender.”

If you want to give your Cosmo an extra burst of citrus flavor, you can take a page out of a savvy bartender’s book and flame the peel.  Cut a 2 inch x ½ inch or so strip of citrus peel (lemon, lime, or orange) from the fruit, leaving behind as much of the bitter white pitch as possible.  You can use a paring knife to strip off any white pith that clings to the strip of zest.

Hold the strip of zest over the drink.  Light a long kitchen match and warm the strip over the flame so that a drop or two of oil falls into the cocktail.  Drop in the zest and serve.

You can use this technique whenever you are making a drink with citrusy notes to bump up the flavor and the presentation.

How to Make a Cosmo:

If you have time, chill a large martini glass in the freezer for at least 15 minutes.  Fill a mixing glass or cocktail shaker with ice cubes

Pour the vodka, Cointreau, lime juice and cranberry juice over the ice.

Cover the shaker and shake well (you can also give the cocktail a good stir, let it sit for 30 seconds, and stir again, repeating once or twice more), until the shaker is very cold.

Strain the cocktail into the chilled glass.

Flame the citrus zest if desired, or just add it to the drink, and serve ice cold.

To flame the lime or lemon zest strip, hold the strip of zest over the drink. Light a long kitchen match and warm the strip over the flame so that a drop or two of oil falls into the cocktail. Drop in the zest and serve.