A Week’s Worth of Bruschetta 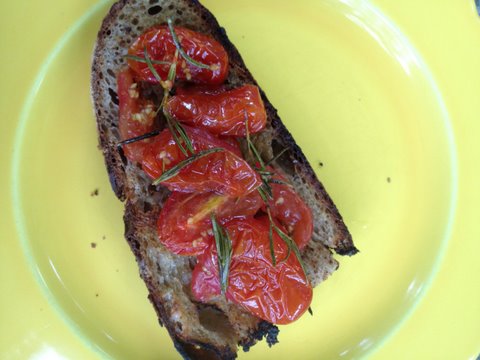 A friend of mine bought me a serious amount of gorgeous breads from a bakery that he adores, feeling the need to share what he said was New York’s very best bread, Bien Cuit. When he asked me if I had tried their bread, and I said no, he reacted somewhat like one would respond if you asked a friend if he had ever drank milk, or ridden a bike, and he admitted that he hadn’t. It was damn fine bread, and when I left his office hugging the bag, all I could think about was crostini and bruschetta.

Pronounced broo-sket-ta, originally this Italian dish was simply thick slices of any good country bread, which were then toasted over coals, rubbed with garlic cloves, and then drizzled with copious amount of olive oil. Another typical addition was a topping of some chopped tomatoes, or sometimes a tomato was just rubbed over the toasted bread, its juices seeping in to the toast. But the term has now been a bit bastardized, and these days means grilled or toasted bread with just about any kind of topping a cook can come up with. And while I adore a plain piece of perfectly toasted, olive oil and garlic slathered bread, I am also all in on the various toppings. And as far as the kids go, I have found that getting them to try something new, or a different combo of flavors, is easier for them to approach on a slab of tender-crunchy toast. Roasted tomatoes, white bean spread, sauteed spinch and onions….Eaten with one’s hands, small portions of toppings, very accessible.

I didn’t actually make all of these bruschetta over the course of a week; because of my bread windfall, I actually made them in one night, and a bunch of us had an all-bruschetta menu for dinner. This is one of my favorite things to do: take whatever bounty has fallen into my lap (a bumper harvest tomatoes from the garden, a pile of bread from a friend) and build a meal around it.

You can do the same, or show some restraint and make a different kind of bruschetta every night of the week.