How to Cook with Tamarind 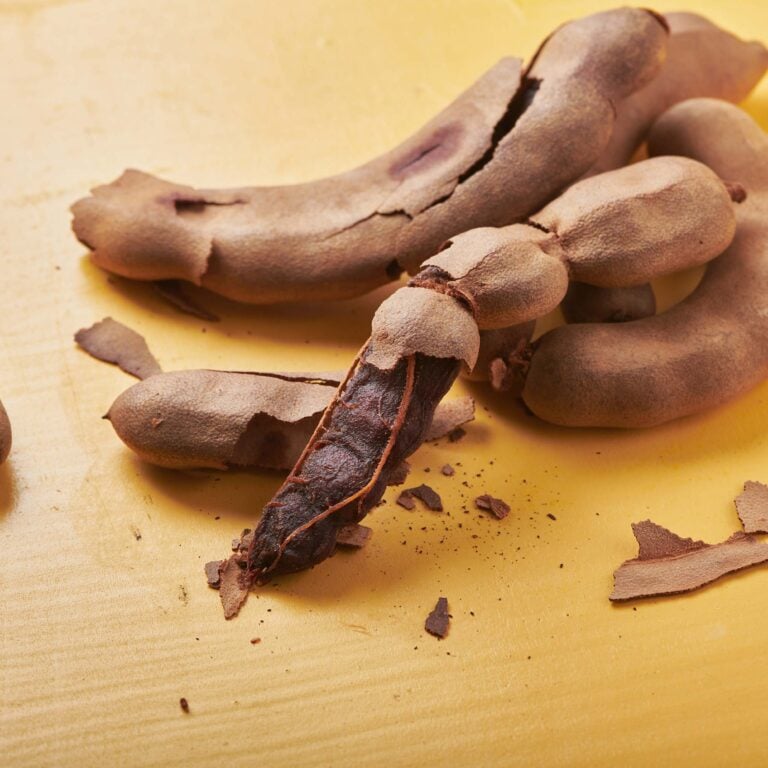 Tamarind is the pod-like fruit of the tamarind tree, which also yields flavorful leaves and flowers.  It is native to tropical Africa, but is now grown all over the world in many tropical countries, especially in Asia and India, the Carribbean, and South America.  Tamarind is a staple ingredient in many spicy dishes and recipes where some tanginess or acidity is desired. Its acidity also can be used to tenderize meat in various cuisines.

Tamarind has a brown shell that can range from 4 to 8 inches long, protecting the pods inside. The exterior is hard and rough and not edible. The interior fruit transitions from green to reddish brown as it matures. There can be anywhere from one to twelve seeds in the pod, depending on where it was grown.

The fruit inside the tamarind shell contains an acidic, fleshy pulp that is used in many different dishes all over the world. As the fruit matures, it becomes less markedly sour, and gains a pronounced sweetness, and this is the type of tamarind most commonly used in cooking.  It’s sharp and tangy, sour-sweet, intense and bracing. Mature tamarind can be eaten straight from the pod.

Raw, unripe tamarind is very sour and usually used in chutneys and pickles, and eaten in smaller quantities as a companion to other dishes.  Tamarind leaves are used primarily in Indian and Filipino cuisines, and are also often used medicinally where tamarind is grown.  They also have a sour-tart flavor.

How to Buy Tamarind

Fresh tamarind pods can usually be found in the produce area of very well stocked grocery stores, especially those that are in areas with a significant Southeast Asian or Indian clientele.   It is also available in Asian specialty markets, and you can find it online.   Tamarind pods are categorized according to the age at which they were picked. Sour tamarind, also known as green tamarind, is very tart and acidic. Ripe tamarind pods are brown on the exterior, and the flavor of the pulp is sour, but not as sharp. Sweet tamarind has a flavor reflecting its name.

This can be purchased in blocks, or in jars or containers. It can be found at most grocery stores in the Asian ingredient section (or the “international food aisle”, which is such a ridiculous notion that one aisle could represent all ingredients not deemed “American”, but there we have it).  The paste also can be found in the frozen food aisles along with the fruits and vegetables. It is made from tamarind flesh mixed with water. Check the ingredient list: you should not see any added sweeteners. Somboon is one popular brand, available in brick shape.

You can find dried tamarind pulp sold in blocks. This form of tamarind contains seeds and membranes, which you should remove before using. These blocks will be darker in color than other forms of tamarind.

Thick and very dark, these concentrates have a very strong tamarind flavor. You can dilute concentrate with water to make it easier to integrate into dishes, and also milder in flavor.

This form of tamarind is usually milder in flavor, so adjust the amount in the recipe as needed. Easy to use, just defrost and add to your recipe.

This is made from ground dehydrated tamarind. Don’t substitute this for any of the other forms. This is mostly used to flavor drinks, sauces and and confections.

Tamarind is usually used in paste form. If you only have the pods, you will have to make the paste. First, place the pods in a bowl and pour boiling water over the pods.  Cover with plastic wrap and let sit for 30 to 45 minutes. Stir occasionally with a fork until the water has cooled to the point that you can use your fingers to separate the fruit from the fibers and seeds.  You will end up will a thick, pulpy date-like paste.

Tamarind is found in many Asian cuisines, particularly Southeast Asian and East Indian, and also in Middle Eastern cooking.  It and especially common in Indian curries, soups, rice =dishes, and stews. It is often used in spicy dishes, often in combination with coconut milk which balances out its sourness.  Pad Thai is one of the most well-known dishes that feature tamarind as a staple ingredient.

How to Store Tamarind

Tamarind pods can be stored in a cool dark place, or in the refrigerator.  They should last for up to three weeks.  Make sure they are in a sealed container to extend their freshness.

Tamarind paste usually comes in a jar or in blocks, and will stay fresh in your spice cabinet for several months if it is unopened.  Once you open the tamarind paste, store in the fridge to ensure it stays fresh for as long as possible. If you have not used the tamarind paste in a while, you may have to stir the paste or add a little water to return it to the proper consistency.

Opened tamarind paste or blocks should be tightly wrapped and stored in the fridge for up to a month.  You can also freeze it in small well wrapped pieces for up to 4 months.

Is Tamarind Good for You?

Tamarind is a unique fruit because of its high amounts of calcium.  It is also high in magnesium, potassium, thiamin and iron, a rich source of vitamin B, and has a high level of antioxidants. Tamarind is believed to have healing properties, and is used as such in Eastern practices and medicine.