In 2001 I was in my 20s, and a cookbook editor at a publishing company.  I was working on the American version of the latest edition of Larousse Gastronomique, which is one of the most referred to and indispensable food reference books amongst the chefs and serious cooks in the world.  No overstatement.  I was in charge of getting an assortment of culinary luminaries to sing the book’s praise, and we would print the best of these quotes on the cover of the new publication.

The quotes came in fast and furious—it is truly a very beloved tome.  My stretch goal?  Julia Child, of course.  But it was a well known fact that Julia never gave quotes—as one might imagine it could have become her full time job to blurb books, so she simply made a no-quote policy.  But this….this was Larousse Gastronomique!  Surely she would make an exception?  I reached out to a friend, who had been her producer for years.

“Julia doesn’t give quotes,’” he said. I persisted (I think the more accurate word is “wheedled”).  He shrugged, in a can’t hurt-to-ask way.  I sent her an advance copy of the soon to be published Larousse.  A while later, I was in my office, the phone rang, and I picked up.

My heart almost stopped.  It was the unmistakable voice of none other than Julia Child.  (Unless it was Dan Aykroyd calling to prank me.)

“Is Katie Workman there? This is Julia Child.”

(I KNOW IT’S YOU, JULIA CHILD!  WHO ELSE COULD POSSIBLY TALK THIS MUCH LIKE YOU, EXCEPT MAYBE DAN AYKROYD?)

I stammered through a short conversation, where she not only agreed to give a quote, but thanked me (for God’s sake) for asking her to contribute, and that was pretty much it.  After that, we became very close friends and baked tarte tatin together frequently.  (No, we didn’t. That was the only time I ever spoke to her). But then she sent me this note, which I promptly framed, and look at often. 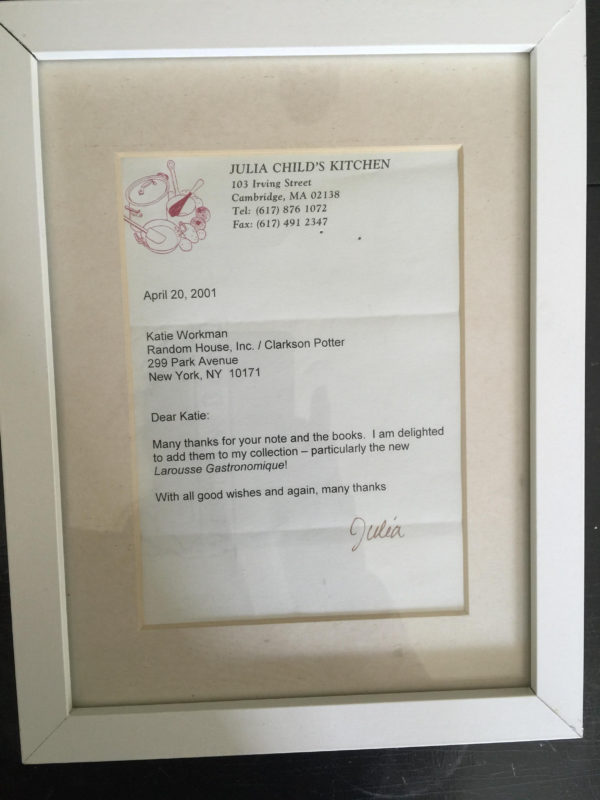 Why do we all love Julia Child so much?  Because she said things like this:

“The only time to eat diet food is while you're waiting for the steak to cook.”

“I enjoy cooking with wine, sometimes I even put it in the food...”

“Life itself is the proper binge.”

'People who love to eat are always the best people.” —Julia Child

“The only real stumbling block is fear of failure. In cooking you've got to have a what-the-hell attitude.”

“As you get older, you shouldn't waste time drinking bad wine.”

“It is hard to imagine a civilization without onions.”

“Always remember: If you're alone in the kitchen and you drop the lamb, you can always just pick it up. Who's going to know?”

“Find something you're passionate about and keep tremendously interested in it.”

“A party without cake is really just a meeting.”

It’s not fair to say I miss someone who I never really met, but I kind of do.

P.S. Her book quote included the line: “If I were to be allowed only one reference book in my library, Larousse Gastronomique would be it, without question.”

Books by and about Julia Child: