In Memory of Christopher Idone (The Dirtiest Dinner Ever) 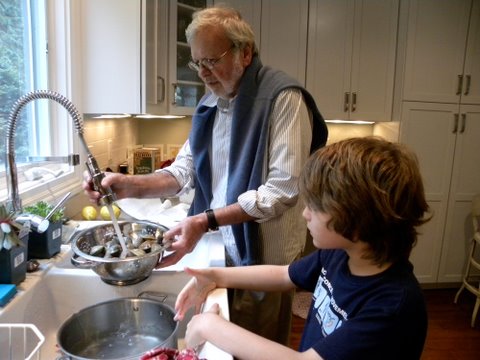 Last Friday the inimitable Christopher Idone died after a long battle with cancer, and two years in hospice. He was one of the best cooks I ever knew — decades ago he lived and wrote about much of what we know about authentic, simple, seasonal, and regional cooking today. His cookbooks Glorious Food and Glorious American Food (and many others) were revolutionary. I met him when I was 25; he was a legend and I was a kid, but I became his editor on Brazil:A Cook’s Tour, and he took a shine to me and we became great friends. He always made me rethink adding an extra ingredient to a dish just for the sake of it, he showed me what ramps looked like growing in the woods, he was a fan of caviar and rice pudding equally, he was demanding, he loved his friends, and he lived an extremely full and accomplished life. It’s so hard to believe he’s gone.

I wrote this piece in 2010, almost exactly 6 years ago to the day he died.

The Dirtiest Dinner Ever

A lot of people can take at least partial credit for some things. Christopher Idone can claim a bucket of credit for lot of things: 1) kick-starting innovative, opulent catering  (co-founding Glorious Food in 1980; 2) pioneering lush illustrated cookbooks (publishing Glorious Food in 1982 and following that up with many more beautiful books); 3) embracing a frank and honest showcasing of American cooking, region to region, with authentic recipes and (again) crazy faithful photography.  Shad roe and rhubarb pie, anyone?

So, Christopher and I met when by confluence of circumstances I got to edit one of his later books, Brazil: A Cook’s Tour. Right after the publication of Brazil, in 1995, I got married, went my honeymoon, and days after got to dash off to Brazil with Christopher for the book’s promotional junket (and to drink caipirinhas). Talk about the good old days.

This past weekend Christopher hung out with my family, and we made the Dirtiest Dinner Ever. Every ingredient needed to be scrubbed and prepped to within an inch of its life before it could be cooked  (mussels, clams, ramps, baby arugula, and watercress, potatoes…); we think we spent over two hours cleaning, and 20 minutes cooking. But it was delicious, and frankly watching my son Jack cook with Christopher was like…well, let’s just say it was like, super cool. 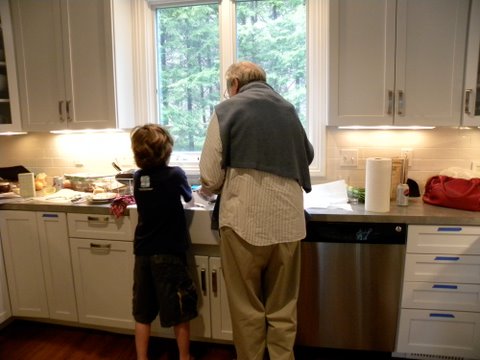 After our trip to Brazil, I member the first dinner I had at Christopher’s place. He made a paper thin sliced fennel salad with lemon juice, olive oil, salt and pepper, and an incredibly simple risotto, poured lots of wine, and then we had cheese. I remember quite clearly thinking then and there “Boy, I use too many ingredients when I cook.”

We made roasted baby potatoes and deviled eggs to start, a pasta with shellfish and ramps, and a watercress and arugula salad, which we ate with sliced Asian pear, crusty bread, goat cheese and orange-fig jam after (my kids also had an ice cream sandwich in case you’re wondering…).  Here are two photos from before I turned off the camera, and simply enjoyed the evening. 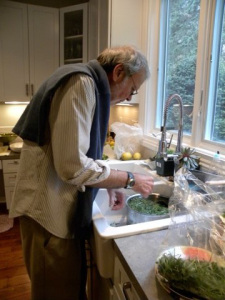 And the next morning Christopher went for a walk, and came back with these; turns out that we’ve had wild ramps growing in the woods near the house all along! Spring just got even better.