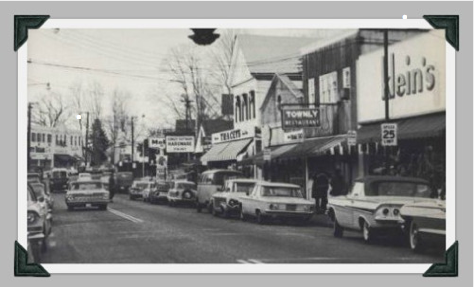 When I was 7 my family moved from New York City to Westport, CT.   My father was the catalyst for this event.  My mother could not have been less happy.  To this day she will tell people that “you can still see my heel marks on exit 17 when Peter turned off the highway.”  She had lived in Manhattan since birth, and the move to the suburbs was a terrible plot twist in her urbane life.

But there we were, in the suburbs, with a yard and a basement, and shortly two cats, and a town with a Main Street.  Back in 1975 (If you’re pausing to do the math, I’ll spare you: I’m 46), Westport still had a real Main Street (exactly as it appeared below- this photo over the December holidays).  There was an excellent pizzeria, a hardware store, some restaurants, a couple of clothing shops, that kind of thing. 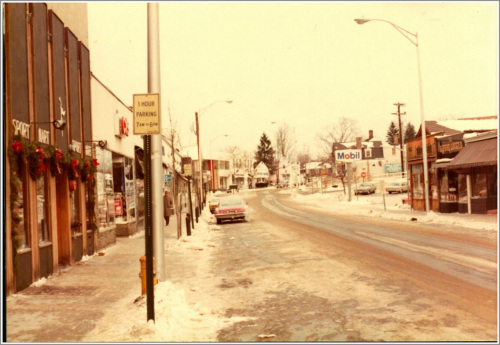 And there were two (TWO!) bookstores.  The Remarkable Bookstore, and Klein’s which sold a little of everything stationary and officey and also records and books. 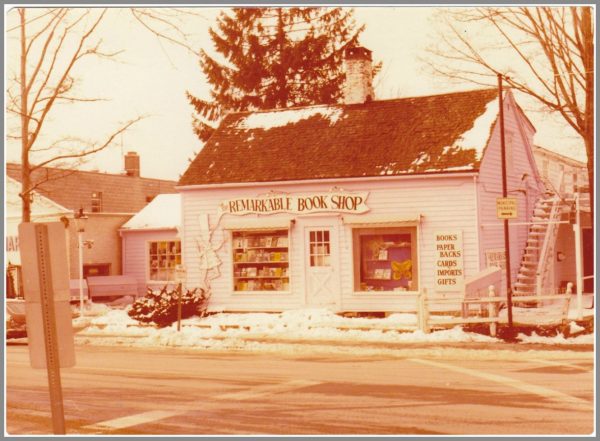 When I was in 6th grade I had a “date” with Kenny Richman.  We met to walk around downtown and we were both nervous and clearly had nothing to lend structure to our afternoon so I pretended I had to buy paperclips for my mom at Klein’s just to give our time together a sense of purpose for our time together, at least for 5 minutes.

We were — and are — Jewish, and we celebrated Hanukkah.  Every night there was a present, some bigger, some smaller, and my mom would write sweetly hokey clues about what each package contained. Something like, “You keep us in stitches!” might be a hint about a rug hooking kit.

But every year two nights were the same, not a surprise, even though she probably wrote clues anyway.  Every year my parents would give me and my sister an IOU to Klein’s for 10 single records and 10 books, to be selected and purchased at any time throughout the year.

A couple very simple things were needed for a gift like this to be possible.  My dad knew Mr. Klein, and my parents had a store credit, so when we picked a book or a record, we had to just bring it to the register and sign our name to a receipt.  Just sign!  Our name!  And take away the book or the record! To be magically paid for later! 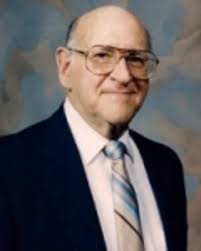 And the other simple thing was that there had to be a bookstore on a main street in our town.  Which there was.  Two, as I mentioned.

The pleasure and freedom and seemingly open-ended opportunity of knowing that you could get a book (and, of equal delight, a record) pretty much any time you felt like it was heady.  And even though that night of Hanukkah might not have been as exciting as the Walkman night, or the Chia pet night, it was the night that allowed the rest of the year to hold the promise of gifts.

Klein’s was the source of a lot of my Nancy Drews and Harriet the Spy books, then Salinger, then Anne Tyler, then John Irving novels.  I have a fuzzy memory of buying an Erma Bombeck book there, which must have puzzled the cashier, as I was probably 10 (but it’s so true!  the grass is always greener over the septic tank!  oh, Erma.).

You will not be surprised to hear that Klein’s is closed, as is Remarkable.  Klein’s is a Banana Republic.  There is a Barnes and Noble now, but it’s not on the main street. But I would like to imagine that if I still lived there, and and went in and talked to the manager, I could arrange a credit for my kids like the one I had growing up.