The Myth of the Relaxing Summer

You know those moments where you are talking to someone, and they say something, and you think “Wow.  I can’t believe she said that.  I might think that sometimes, but I don’t believe I would say that out loud.”

I think I have become that person.  I mean I’m not running around screaming profanities (at least not outside of my home), but these days feel so busy and cluttered that my patience for censoring myself has shriveled up into something resembling the little dried apple core that I found under the car seat recently, after a rollicking game of “what’s that smell, and where is it coming from?”  Keep in mind that both my children have two digits in their ages.

So, you go to a party or the supermarket or run into another mom on the street, and the “how’s your summer starting off?” questions start to roll.  The other mom is loving summer.  She loves the quieter pace, the looser days, the fact that her kids apparently are content to build forts out of twigs in the backyard all day long, tiring themselves out with wholesome activities, and only coming in to fall into deep, peaceful slumber at the end of the day. 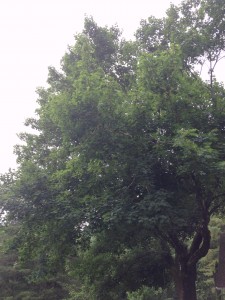 She apparently does not have to tell her children that if they don’t turn off the X-box this very second they will lose their video privileges for the rest of the week.  She doesn’t have to explain to kids that they need to move their butts because she has to leave the house right now for work.   Her 13-year old seems to understand intuitively that until he buys his own socks he is not allowed to run in the dirt without shoes.   She does not have to remind the children that they were the ones who wanted a dog in the first place, that leaving a cereal bowl on the table with a crust of Cinnamon Life cereal and milk always ends badly, that if they stay up until stupid hours that the next day will pretty much suck for them and for everyone who has the misfortune to engage with them.

These are not real problems, I’m aware of that.   These, and other ditties like “Packing The Camp Trunk” and “No, Breakfast is No Longer Being Served at 11:00” are what have been accurately described as first world problems.  Also, I really love my kids, and most of the time I like them, too.  But unstructured time with kids is hard, and I’m really not sure what I did previously with the time that I spend organizing the kids’ days against my work schedule.   I would be a big fat liar if I didn’t admit that I’m staring at the spot on the calendar where my two kids will be away at sleepaway camps AT THE SAME TIME FOR 10 DAYS.   This has never happened before.   The words solar eclipse come to mind.

Anyway, I just wanted to let you know that if you ask me how my summer is going, and catch me at a particular moment, you may actually find out.  But I will listen to you, too, I promise.